In English this week we finished the story of The Junkyard Wonders and retold the story picking out the key moments. We then wrote a recount. We also started a new class novel called The evil Hairdo. We have lots of questions about it so far, it seems to be a funny story.

In Maths we have been learning about Place Value of three digit numbers. We were ordering numbers and played games to see if we could find the highest numbers created in the class.

In Gaeilge we have started Bua na cainte and were asking and answering questions about ourselves.

In history we are learning about the legends of Fionn and the Fianna and the story of the Salmon of Knowledge. Here are some of our freeze frames from a drama lesson about the story.

In art we created colour wheels and made eyes from them.

We have all settled in really well and are working our way to our reward for getting all our routines. So far we have managed to line up really well in a short space of time.

In our first P.E. lesson we practiced the build up to start a race, and for our warm up we played ‘Over Under’.

We went over to Dartmouth Square and we did an Autumn scavenger hunt.

We have been learning about the Vikings, so in art we drew Viking longboats, but instead of the traditional dragon heads we had the option to do any animal.

This week we started our class novel called ‘Seven Spiders Spinning’. Each one of us has our own book so we can read along with Ms. Delaney.

We have started ‘Spellings for Me’. We did our mastered word tests on the chrome books. In Gaeilge we learnt a song about a boy who loves a girl called Alanna.

In maths we have been studying about place value using little blocks to represent units. We wrote about what we think might have happened to Lars Larson on his journey home from Siberia.

In Core Curriculum we have been learning about Judaism. For example Jews only worship one god and they have to follow 613 laws! 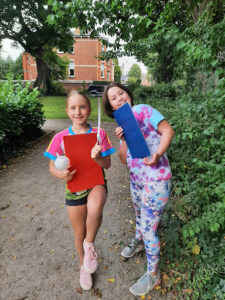 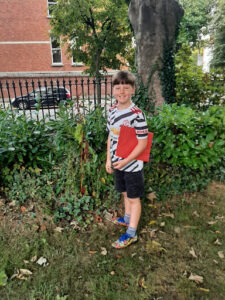 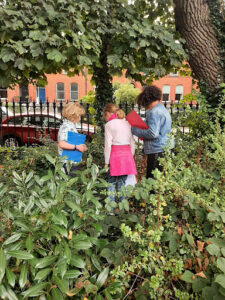